While I am glad we are currently getting a much needed nice wet winter the current snow and rain situation has been making it more difficult for me to visit my usual Los Padres stomping grounds. In thinking of places I could visit a bit closer to home  I remembered Back in July of 2018 I attempted a run up Cienaga Cyn From Templin Hwy. For  reasons beyond my control I did not make it near as far up the Canyon as I would have liked. I vowed to go back and today felt like a good time to do that. This time however would be from the top off Old Ridge Route heading to Knapp Ranch formerly known as Kelly Ranch and possibly even earlier being the physical site of the Pre-1811 Tataviam village of Cuecchao. Inhabited by the Chumash Indian sub-tribe Tataviam, or Alliklik as they were called by locals. (See photo below for supporting evidence).

Frank Knapp purchased the Kelly Ranch in 1962 and mentions visiting as early as the 1930's. The historical record on who exactly Kelly was and why he sold the property seems to be a bit sketchy. From some accounts Kelly may have operated a gas station and restaurant on the nearby Old Ridge Route from 1915 to 1933. In the early 30's Knapp and his former boss King Gillette(of yes the famous Gillette Razor blade) were searching for the legendary Los Padres Gold Mine. (Spanish Monastery were said to have found an ultra rich gold vein using forced slave Indian Labor). Gillette was obsessed with finding this lost mine and sunk his fortune into doing so. According to a former Knapp employee from the 70's Kelly was supposedly beaten by some guys badly in a horse pasture in 1962. Rumors speculate that maybe it was for information on the whereabouts of the Los Padres Mine. I won't go into detail here about the legend but the history of it and its location is fascinating. To this day it still has not been found. To add to the Kelly mystery a 1983 article in SCV history notes they could find no reference to any Kelly at all, except for Allen Kelly who was hunting Grizzly bears in 1889. There is reference to Annie Rose Briggs though said to be living at the property in the 1950's. (Some photos below of what's left of the Knapp ranch structures, click on any picture to enlarge them). 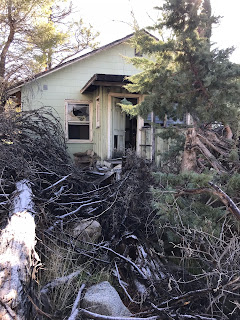 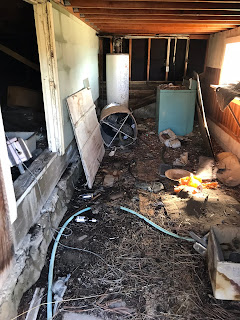 Front View of the main house and a look underneath 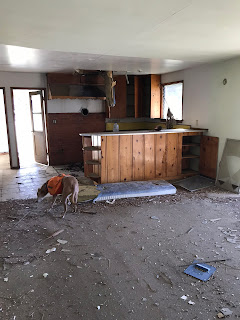 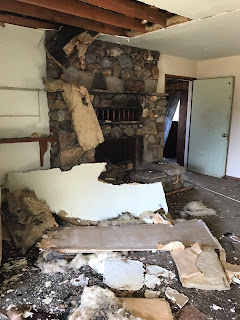 Living room and the kitchen

Knapp spent many years living secluded on the ranch with his animals. He spent much of his time hunting, fishing, tending his vegetable garden and finding Indian artifacts. Frank loved his ranch, when he first saw it sometime in the 30's gold mining he knew he would own it someday. Frank Knapp passed away in 1988 and left the ranch to his brother Joe who held the property til his death in 1992. Relatives then sold the ranch to the organization Friends of the Forest bankrolled by Rosie Greer. The United States Forest Service would then go on to acquire the Ranch from Rosie in a 200 acre land trade. (There are multiple worn down structures still standing on the property see more photos below. To make these easy to identify on the included map I have attached my own label name to them).


While at the property we decided to add a few extra miles to our trip by heading deeper down into Cienaga Cyn.(This was a bushwhack). Below the main ranch are multiple fenced in areas that looked to be used for grazing. Even further on Cienaga Canyon trail passes nearby an Indian Burial Site. Stories of malevolent Indian spirits guarding lost gold mines in the area are not uncommon. The man who originally found the burial site was later severely injured in a motorcycle accident along the trail and Hugh Blanchard describes a report from a forest service worker and his female Native American companion about her insisting they turn back back from a hike toward the mines as she was getting a very uneasy and disturbing feeling of some sort of evil or unfriendly presence.

If you found this write up interesting and would like to pay a visit to the Ranch here is one way you can do so. From the Santa Clarita Valley head North on the 5 freeway to the 138 East. Take Old ridge route for a little over 3 miles to its junction with Forest road 7N23 and park here. (N34° 42' 56.8" W118° 42' 39.1"). Warning be careful heading in on Old Ridge Route this time of year as you can see from the photos below the road can be icy and surrounded by snow especially in the morning. High clearance vehicle is best. (By midday when we left all the ice and snow had fully melted away).


Once parked leave old ridge Route and follow Forest road 7n23 uphill a very short distance to it's locked gate. Pass through the locked gate and continue along, at about .6 of a mile you will arrive at the junction with forest Road 7n22. Keep right and head onto 7n22.

From the parked car to Knapp ranch is about 5 miles. Mostly downhill all the way in with some decent elevation gain on the way out. My day finished at just under 14 miles however we explored further down the Canyon. For an out back just to the Ranch you're looking at just over 10 miles. The entire Hike follows forest roads until reaching the ranch so the trail is in good shape and easy to follow. Get out there and have a look! Extra adventurous folks might even try finding Gillette mine which should be about another 2 miles further from the ranch. (KMZ file and GPS track available for download below the google map). 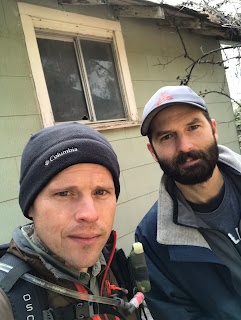 Very cool. The stories about the malevolent spirits near the lost gold mines are intriguing.

Hey Madison yeah the tales of the Los Padres gold mine are pretty wild and fascinating. Thanks for reading brother.


I I a, learning so much. Thank you for sharing. bestreviewsation

Graceful written content on this blog is really useful for everyone same as I got to know. Difficult to locate relevant and useful informative blog as I found this one to get more knowledge but this is really a nice one. pixoglobalreview

My dad used to take me there when I was a kid. Him and frank were good friends, I remember it was a whole day trip for us in our jeeps and my dad and frank would sit on a rock patio and drink beer and tell stories. I'd love to go back there someday.

Lost In The Los Padres

View my complete profile
Thanks for stopping by here you find my wilderness blog, mostly documenting my adventures throughout the Los Padres National Forest. Click on any image to enlarge and feel free to drop a comment on any post. Should you like to chat further please use the contact pages form located at the top of the blog. 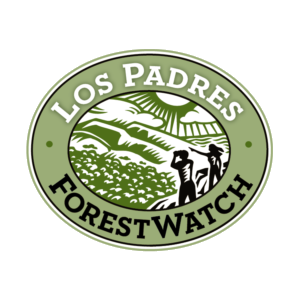